LED lighting market business opportunities bring endless imagination to the industry. LED lighting applications have jumped from outdoor LEDs to indoor lighting applications in the past. According to Strategies Unlimited statistics, the development of LED indoor lighting will have an exponential growth trend in the next five years. According to estimates, by 2011, its output value will reach tens of billions of dollars. Especially in 2009, the EU took the lead in implementing the plan to ban incandescent lamps, and energy conservation issues have received much attention, creating huge market opportunities and optimistic prospects for LED indoor lighting. The following is an analysis of the development of high-power LEDs in the field of indoor lighting from the needs of lighting technologies such as heat dissipation technology, optical design and drive design.

The development of high-power LED lighting depends on two major elements: one is the chip itself; the other is the lamp technology, including heat dissipation, optics, and driving. The external environment also needs to look at the national and international standards for LED products.

1. Development of the chip

At present, the key to the development of LED chip technology lies in the base material and epitaxial growth technology. The base material has developed from traditional sapphire materials, silicon and silicon carbide to new materials such as zinc oxide and gallium nitride. Whether it is a high-power chip for key lighting and overall lighting, or a low-power chip for decorative lighting and some simple auxiliary lighting, the key to technological upgrades is how to develop more efficient and stable chips. In just a few years, with the help of a series of technical improvements including chip structure, surface roughening treatment and multi-quantum well structure design, LED has achieved a huge breakthrough in light efficiency. Figure 1 is a schematic diagram of the development of LED chip structure. With the gradual maturity of production technology, LED quantum efficiency will be further improved, and the light efficiency of LED chips will also be enhanced. 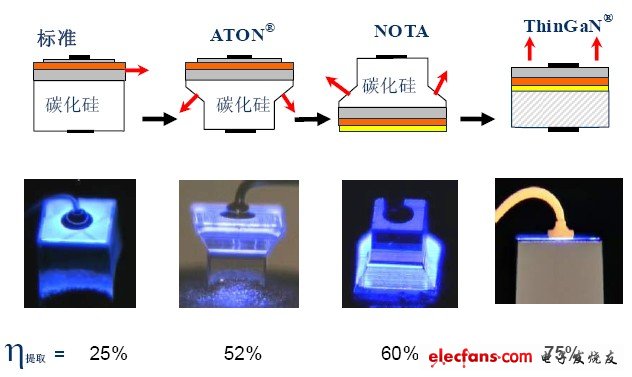 Thin film chip technology is the core technology in the production of ultra-bright LED chips, which can reduce the light output loss of each side, and can use the reflective surface at the bottom to output more than 97% of the light from the front (see Figure 2). This not only significantly improves the light efficiency of LEDs, but also creates superior convenience for lens design.

Previous: Mobile payment: life on the cloud is safer