Compared with the traditional resistive touch technology with the highest market share, the capacitive touch technology brings many advantages to users, including: up to 97% penetration rate and more realistic color rendering bring us better The visual enjoyment; the touch function only needs to touch or even not actually touch the screen, which brings users more easy and flexible maneuverability; longer service life, the touch life of the capacitive screen is about 200 million times. Two times the four-wire resistive screen (one million times) and five times the five-wire resistive screen (40 million times).

From the point of view of the development process of touch technology, the earliest market to introduce touch technology is the field of industrial control. Its purpose is to integrate the complicated and large-area mechanical equipment control panel into a single window and multiple paging screens. Large size resistive screen. However, the shortcomings of the life and resistance of the resistive screen can not meet the needs of the industrial control field. Therefore, when the large-sized SCT came out, the high-end equipment machine immediately switched to the SCT scheme. Until around 2003, due to the reduction in the manufacturing cost of resistive screens, small sizes began to be used in PDA, GPS and other portable products, and touch technology officially entered the consumer market. In 2006, the iPhone adopted a small-sized PCT, and its excellent optical characteristics and multi-touch function set off a wave, becoming the most high-profile touch technology in recent years.

From the above, it is not difficult to find that at present, the consumer market with a small size as the mainstream has only two types of touch technology: resistive and projected capacitive. The former has low cost, but its poor optical performance and tolerance have long suffered. The market is criticized; although the latter has many advantages, the suppliers of real energy production are few, and the price is naturally very expensive, so that it is only found in a few high-priced products.

The reason why the SCT is rarely used in the small-size market is mainly due to cost. SCT panel manufacturers have long lacked key optical coating technologies and must be outsourced for processing, while SCT touch ICs are controlled by a few technology manufacturers and their selling prices remain high. In addition, unlike resistive screens that can be freely matched with resistive ICs, SCT screens and ICs must have excellent compatibility to work stably. The aforementioned factors make the price of SCT in small-size consumer applications not far from that of PCT, which is naturally difficult for customers to adopt.

However, compared with resistive technology, SCT can greatly improve its defects; compared with PCT, SCT technology is more mature and stable, and can be introduced into mass production. Therefore, we can reasonably deduce that when the overall cost of SCT is greatly reduced due to the strategic alliance of industry members and the integration of technical resources, SCT will have the opportunity to become the best solution for small-scale consumer applications.

The following will briefly introduce the basic principles of PCT and SCT, and compare the advantages and disadvantages of these two technologies.

PCT is built on the concept of matrix. In the touch screen production part, the ITO of the PCT panel is etched to generate a specific pattern, the purpose is to improve the SNR value of each touch point and enhance the accuracy of recognition. By copying the aforementioned pattern in the X-axis and Y-axis directions several times (the number of times depends on the screen size), a PCT matrix similar to a keyboard is formed. Figure 1 is the most common diamond pattern at present. 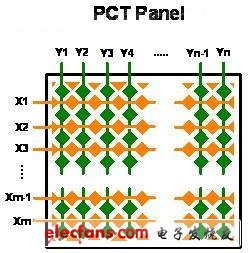 Figure 2: PCT equivalent RC circuit and the detected waveform on the X2 wire before and after the finger touch

Take the simplest RC oscillation scheme as an example. We simplified the equivalent circuit of the X2 wire in the X axis to Figure 2 to form an RC circuit composed of n Rp and n Cp, where Rp and Cp represent the equivalent ITO segment internal resistance and PCT, respectively The inherent capacitance value of each node (the intersection of XY axes). When a finger approaches or touches the screen, a capacitance (Cf) is added to the screen; for this RC oscillating circuit, the appearance of Cf means that the period of oscillation becomes longer and the frequency decreases. By calculating the change of the oscillation period and frequency on the X2 wire before and after the finger touch, the PCT controller can recognize the position of the touch, and even the distance between the finger and the screen (that is, provide Z-axis information).

The SCT panel is a piece of uniformly coated ITO layer, and the four corners of the panel have an outlet (UR, UL, LR, LL) connected to the SCT controller. In order to be able to detect the exact position of the touch point, the SCT controller must first establish a uniform electric field on the SCT panel. This part of the work is achieved by the IC's internal driving circuit charging the panel. When a finger touches the screen, a small amount of current will flow. At this time, the sensing circuit in the IC will separately analyze the current on the four lines and calculate the XY coordinates of the touch point according to the formula in Figure 3. In order to overcome the influence of interference, hardware or software filters can be used to process the calculated coordinate values. 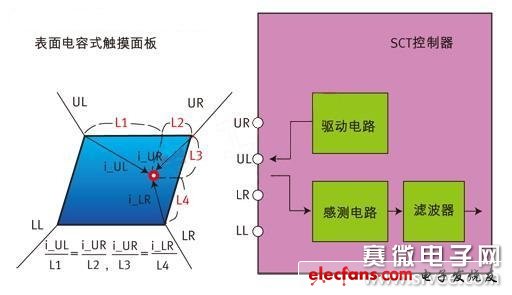 The biggest difference between PCT and SCT is that PCT has the opportunity to realize multi-touch (MulTI-touch), while SCT can only achieve single-touch; PCT seems to be superior to SCT, but in fact This is not entirely true.

The working principle of PCT is not complicated, so it is not difficult to provide an exemplary prototype display; however, when engineers try to convert the PCT Demo Set into a mass production plan and prepare for mass replication, various technical challenges will come. The main challenges include the following three aspects.

The weak signal to be detected (made into rough song) is susceptible to environmental influences and becomes unstable, resulting in inconsistent sensitivity of the touch function and even possible malfunctions. The change in capacitance due to touch is actually very susceptible to temperature and humidity. The current common countermeasure is to use timed automatic calibration to overcome this problem. In addition, other electrical appliances being used or other functions of the product itself (such as the RF of the mobile phone) will cause interference to the signal measurement. This part has to be achieved by improving the SNR by software or hardware; as of now, IC design companies still have room to work in this regard.

Yield of mass production needs to be improved (made into rough song) PCT technology has inherent advantages of multi-touch, so since the iPhone came out, almost all the focus has been on PCT. The touch industry includes touch screen manufacturers, IC design companies and program development Businessmen have invested huge resources in development; but until today, there are still not many PCT commodities in the market. The problem is that the overall production yield is still not high, resulting in high costs. The reasons for the low yield rate are: the existing PCT controller is still not mature enough, and the self-adaptation ability in different application environments is still insufficient, so the touch menu is now unstable, in this case, the characteristics of the PCT panel (such as : The internal resistance and capacitance of the panel, etc.) are strictly limited to reduce variables; due to the limitations of the capabilities of the PCT controller, the strict requirements for the consistency of the characteristics of the PCT panel are often the main reasons for the decline in yield.

Patent problems Because many basic gestures and multi-finger touch functions have been patented and approved by some manufacturers, the multi-point advantages of PCT products cannot be used in many application fields (especially the main mobile phone market)! Overall, the PCT solution will certainly have a place in the market in the future because of its multi-touch advantages. But in the current situation, it is still not a mature solution.

In contrast, although the SCT technology also faces the problem that the Capacitor signal is susceptible to interference in the design of the controller, but through the continuous efforts of the IC designer, the SCT scheme has been widely used in various environments. For example, the SCT touch IC (WT5750F) developed by Weiquan Electronics and Wanda Optoelectronics, through various adjustment mechanisms contained in the IC, can easily overcome the differences between various external environments and the size of the touch screen to provide high quality steadily Touch experience. In addition, in order to meet the needs of hand-held devices for miniaturization of the organization, Weiquan Electronics' SCT touch IC has made great efforts to improve product integration, so it can meet the two important demands of miniaturization and cost reduction.

In addition to IC, SCT's touch screen structure is also simpler than PCT, and it is easier to overcome the problem of noise interference in hardware. In addition, through technological improvements and breakthroughs in key technologies, SCT's overall solution has a cost competitive advantage comparable to resistive ones. Taking the optical coating technology developed by Wanda Optoelectronics as an example, the light transmittance of the touch screen can be increased from 87% to 97%, and the reflectivity can be reduced from 12% to 2%. More importantly, the yield of optical processing can be controlled at more than 90%, and the steps of outsourcing processing can be eliminated, the technological autonomy and productivity can be improved, and the manufacturing cost can be greatly reduced.

SCT technology is one of capacitive touch technologies, so it also retains many advantages of capacitive: "better visual enjoyment", "easier and more flexible maneuverability" and "longer service life", etc .; plus SCT for Compared with PCT, the requirements of touch screen characteristics are relatively loose and the mass production technology is more mature, which makes it have the advantages of high yield and low cost. Moreover, in actual operation, users' demands for single-point selection, single-point gestures and handwriting functions are more urgent than multi-touch (MulTI-touch), and these functional requirements happen to be stable provided by SCT. Therefore, before the PCT solution matures (functional stability, patent issues, high production yield and low cost), the SCT solution is a touch solution that is very in line with market expectations.

Next: Research and Design of Narrowband Voice Communication System