Appleâ€™s press conference was a spurt of a thousand waves, and the speed of the game dominated the headlines. The Apple Watch, which appeared as "One More Thing", also left a deep impression on the public. Perhaps more possibilities are due to the incomprehensible application interface.

Before this, not only users, but many manufacturers also highly expected Apple Watch. Lin Gao, CEO of Beijing Gaozhi, said during his interview that for the smart watch market, the biggest bottleneck at this stage is the removal of functions and appearance. What can be called a smart watch?

Lin Wei admits that at this stage, there is a lack of associations in the world to set standards, and there is no big factory to take the lead, and the market products are mixed, which is the core key to restrict the development of smart watches. The launch of Apple and other giants will undoubtedly inject a strong boost into the market.

However, since this conference, some people have put forward the idea that "Apple Watch is not the future". Its weakness is that it is "soft", which includes design ideas and the most deadly - Internet service. 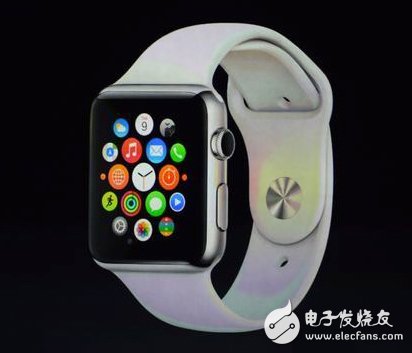 Why care about the intensive application interface of Apple Watch? One of the important reasons for opening up the visual experience is that it represents the idea that the Apple Watch still follows the smartphone and the application centering. "When you want something, just open the app." How familiar this is, but it is on the phone, not on the watch.

For a smart watch, such a small screen, because of an operation to find and open the application, is a very painful behavior, there will be such a dense interface and crown physical key to help users quickly in the application heap Find the app. But this is not the best solution.

In the war between Android and iOS, we may lock in between Moto 360 and Apple Watch. The design principle of Moto 360 is to provide only the most relevant services and minimize interaction. That is to say, when you are not operating, the watch will actively push the information that it thinks you need to push the bar to the interface to prompt you, and if the user wants to actively activate what function, it can also be realized by voice. It doesn't need to be found in a complicated application interface (of course Moto also has a function menu, but it is very simple).

Take Moto 360 as an example, it has no concept of application, and there is no so-called app store, but only a single "card", the card is full of information, such as various tips from the mobile phone (telephone, SMS, mail, etc.), Or weather, geography, navigation... all information becomes a vertically arranged "stream", you can swipe left or right, or swipe right to close the card.

This form makes it easy to see on a small screen. And if you want to complete the functions such as returning text messages, navigation, setting alarms, etc., you will be able to use voice commands. Even if you want to call a special application on your phone, such as a car with Lyft, you don't need to click on the Lyft interface on the watch, but instead you can say "OK Google, order a Lyft" to the watch.

In this way, people can complete the processing of information by simply sliding such micro-interactions and voice commands. You don't need to go to the application menu bar to see what action you want to complete. The benefits of this de-application are very obvious.

Limited by the small size of the screen, the smart watch can not complete the complex interaction on the phone, so compared with the fancy Apple Watch interface, the application of Android Wear can provide a cleaner and simple UI, card-style design It allows you to understand the core information under "a glimpse", while pulling down, sliding left and right, sliding up and down, tapping, long press and other simple and comfortable gestures, but ironically reminds people to use the iPhone for the first time. The feeling - very natural and smooth, no need to learn, familiar with a few times, you will understand the basic rules.

Of course, the de-applied design of Android Wear also makes it impossible to carry too heavy functions at present - but is this not a paradox? If we do the same thing as a mobile phone on a watch, why do we need a watch?

The COB downlights can be divided into turnable, non-turnable and Mini designdownlights. We are the manufacturer of producing energy saving ceiling lamps. There are three color temperatures with cool white, warm white and natural white of down lights. Available RD/BL/GR/PK with multi-color options for you. The unique features of LED Down Light are: CRI>80, PF>0.5. These ceiling lamps are mainly apply to hotel, restaurant, office, shopping mall, super market, residence, hospital, coffee bar, club, staircase, entrance and toilet etc.

Next: Zhaomingxin Technology: Bringing the Crystal Chip to the 2014 High-tech LED Lighting Exhibition