With two or more independent LEDs, today's drives are able to control the trendy decorative light that can be used in portable systems. Not only is the ILED peak current fully programmable, each LED can be dimmed to any value between 0 and 100% brightness range. In addition, the embedded progressive dimming function, which works in both up and down directions, provides a special illumination sequence that is required by the end customer. This article describes the characteristics of this driver and focuses on progressive dimming based on a typical application. In addition, related software is discussed as a typical example.

In general, LED drivers provide a constant current to bias the LEDs under appropriate conditions. If we consider a portable system, the power supply is a battery with an output voltage range of 2.8 to 4.2V (assuming a standard lithium-ion battery). Since the forward voltage of today's low power LEDs varies between 2.8 and 3.5V depending on the bias current and room temperature, an interface is needed to ensure that the LEDs are properly biased during normal operation. This is the purpose of the driver IC, and the first module to consider is the voltage range of the current control system.

Figure 2 Comparison of advantages and disadvantages of serial-parallel links

In this regard, we can consider connecting the LEDs in series or in parallel: these two connections have their own advantages and disadvantages, as shown in Figure 2.

The key point is the ability to independently and dynamically adjust the brightness of each LED in a color application. While it is possible to use a boost structure that uses a switch to connect between each LED to control them, serial alignment is not the preferred solution, and parallel architecture is the easiest to implement.

The charge pump is the DC-DC converter that produces the smallest and most suitable low voltage and EMI problems. On the other hand, using multiple modes of operation (1X, 1.5X, 2X) purely increases efficiency, allowing the system to save as much energy as possible while running in a portable device.

In addition to the DC-DC converter, the second key parameter is the current matching between the LEDs belonging to the common array: the RGB structure cannot accommodate the bias current difference between the LEDs, as these differences translate into color representations in video and image displays. This problem is solved by using a precise set of current mirrors as shown in Figure 3.

To achieve accurate and stable forward bias conditions in the LED, a reference current is generated by an external resistor associated with the constant voltage provided by the bandgap reference. Transistor Q1 associated with operational amplifier U1 produces a constant output voltage at the Vref pin. The external resistor connected between Vref and ground produces a constant current through Q1 and Q2. This current is mirrored and amplified by the Q3~Q7 transistor family. Each current is connected to switches S1~S5 and added by transistor Q8. Finally, transistor Q9 replicates the reference current to LED 1. This configuration is replicated for each LED, and the layout of the chip is carefully analyzed to optimize the match between each LED.

In this way, each LED shares the same I-LED peak current and requires additional electronic circuitry to independently control the brightness of each LED. This function is achieved by using separate PWM modulation for each LED (see Figure 4): Switches S6~S8 controlled by digital signals PWM1 to PWM3 enable/disable the associated current mirror, thus producing brightness control of the associated LED. The net advantage is that the LED peak current is constant, ensuring that the color performance is not diminished by the brightness control, and the LED's operating point remains in the reference color defined by the color map, as shown in Figure 5.

The waveform in Figure 5 is derived from an industrial application that demonstrates the characteristics of the three PWMs embedded in the selected device. The three LEDs are controlled by a common low frequency clock with a duty cycle setting to suit a given application. It is obvious that each PWM can be independently attenuated or enhanced, ranging from 0 to 100% duty cycle, while the ILED peak current is constant. 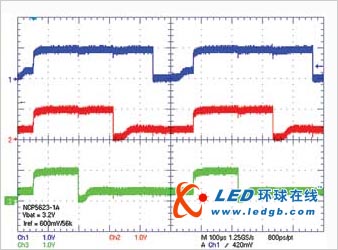 
A more complex circuit design can be used to achieve complete independent control of the LED: both I-LED peak current and PWM can be digitally programmed to produce an almost infinite range of colors and brightness as the I-LED peak current moves through the color map. The basic model description is shown in Figure 6. 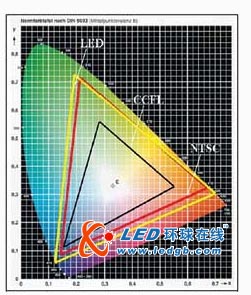 The standard I2C port is used to handle I-LEDs and PWMs, and software is used to set the built-in functions of the controller. To better illustrate progressive dimming, we will use the NCP5623 controller as a reference to describe the operation of this function.

Before the PWM can occur, the ILED peak current will be set by sending the appropriate code to the chip as defined in the NCP5623 datasheet. To create a smooth, enhanced brightness, the software will send the number of steps available to the drive: in this case, we have 31 levels. A simple loop can be applied to the microcontroller (MCU) to handle this work, but the brightness rise process can be disrupted due to priority interrupt issues associated with real-time systems. The NCP5623 includes built-in sequences to avoid real-time operation of the MCU: whether it is brightness enhancement or attenuation, progressive dimming can be achieved with very limited software steps and without the impact of high priority interrupt events.

Basically, the two built-in registers will be pre-adjusted as follows.

The goal and direction of progressive dimming:

â†’The last bit [B5:B0] contains the timing of each stage

The ILED current will increase smoothly from 0 to 5.5 mA, and the total sequence timing is equal to the contents of the GRAD register bits [B5:B0] multiplied by the number of stages defined by the UPWARD register. In this example: 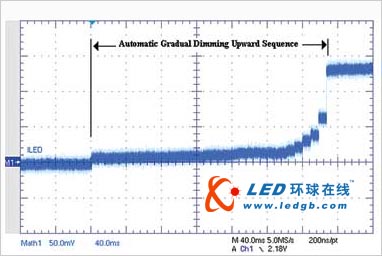 The waveforms given in Figure 7 show the upward gradual dimming; the DWNWRD registers are properly programmed to implement the downward dimming operation.

As we can observe, the ILED current increases in a quasi-exponential curve, which is sufficient to compensate for the sensitivity of the human eye.

The opposite direction is easily achieved by using the appropriate code in the upper three bits of the data register, while the rest of the sequence is the same.

Built-in registers make it possible to dynamically control progressive dimming, allowing simulation of different visual effects. For example, we can repeat the sequence created by the digital modulation during the up or down period, or we can create a similar waveform sawtooth on the opposite side of the waveform in combination with one of the progressive dimming and sudden changes.

Finally, combined with progressive dimming and PWM embedded in the chip, the ILED pin modulates the ILED peak current to create a fairly complex sequence of illumination: a decorative light system with a minimum number of passive components around the main controller. structure.

Next: Influence of color space on color rendering evaluation