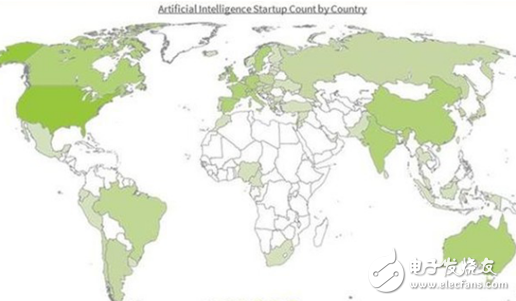 In Wuzhen Think Tank and Netease Technology released the "Wuzhen Index: Global Artificial Intelligence Development Report 2016", we can see that the total number of artificial intelligence enterprises in the United States is 2,905, ranking first in the world. In California alone, the number of companies in the San Francisco/Bay Area and the Greater Los Angeles area reached 1,155, accounting for 19.13% of the world. Although the number of artificial intelligence enterprises in China is less than that of the United States, the North and Shenzhen cities account for 7.4% of the global total, but they rank among the top three in East Asia and rank third, sixth and eighth in the world.

Here, VentureScanner breaks down the artificial intelligence industry into 13 categories, including:

This type of enterprise mainly provides underlying support technology solutions for analyzing image acquisition and identification related information, such as the construction of image search platforms. Of the 166 companies that are counted by VentureScanner, this category has financing amounts of $799 million.

This type of enterprise primarily learns and manipulates existing information for use in a particular domain by leveraging specific learning algorithms. Of the 166 companies that are counted by VentureScanner, this category has a financing amount of $3.6 billion.

This type of enterprise focuses on algorithm development research and aims to achieve learning from existing data, including building data models for forecasting, analyzing behavioral data, and so on. Among the 180 companies counted by VentureScanner, this category has a financing amount of $1 billion.

Natural language processing This type of company develops and builds algorithms primarily for processing human language input and transforming it into a variety of other forms of expression, such as two-way conversion of speech and text. Of the 232 companies that are counted by VentureScanner, this category has a financing amount of $1.1 billion.

Previous: Do you know the five major careers with the most potential for development in the future?

Next: Internet development has reached the end of the Internet of Things is the next vent?